Travelogue Highlights from the October 10-13, 2016 Western Rite Conference of the Russian Orthodox Church Outside Russia (ROCOR)

Metropolitan Hilarion of Eastern America and New York, First Hierarch of the ROCOR, and Metropolitan Jonah (former first hierarch of the OCA, now serving in the ROCOR in Washington, D.C.) were present throughout the Conference. What a blessing! 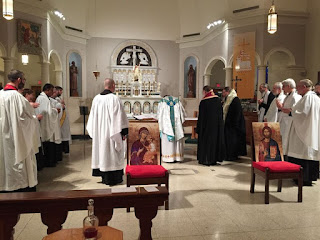 at left: Metropolitans Hilarion and Jonah, at prayers just before the Communion of the clergy, Oct. 13, 2016. 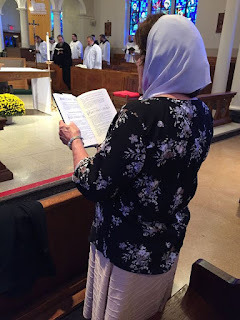 1. October 10, 2016, Monday.
Two-man delegation from Austin, Texas arrived just before 5 p.m. It was good to take the Metropolitan's blessing and see the brethren. In the evening Compline was held in the borrowed church. Unfortunately, it turns out that the TSA had held onto my laptop when I was frisked at the Austin airport, and the retreat center's public computer is no longer accesible. I realized I had a lot of work left to do to make printouts to assist the servers, master of ceremonies, and Metropolitan for their respective roles in the Thursday morning Mass I was to offer. By the way, for those who don't know, Orthodox have used the word "Mass" to describe the eucharist since before Orthodox started using the term "Liturgy" for it. "Holy Mass" is a good, ancient, patristic, Orthodox terminology used by countless Orthodox saints. pic: Monday evening service. 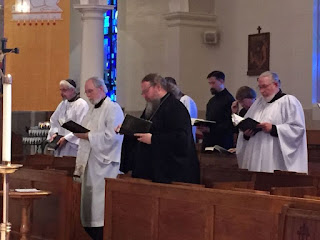 2. October 11, 2016, Tuesday.
In the morning, a Requiem Mass was celebrated by Dom James Deschene, a long-time abbot of our Church Abroad. I missed most of the presentations this day because I was working to make up for lost time on the materials to guide the servers, M.C., and Metropolitan through Thursday's Mass. Each day, we had an early breakfast, a lunch, and a supper. We were very well fed. The presentation I most hated to miss, was a workshop held by priest Nicholas Alford of the Antiochian self-ruled archdiocese on the divine office. There was a service sung called the Midday Office. Later came Vespers, then supper, then Compline. By now the handling of the Thursday Mass was taking shape. The Metropolitan tonsured a reader and three subdeacons for their Western rite (WR) communities. pic: Tuesday Vespers service. 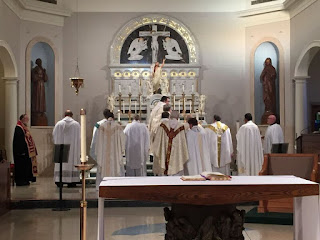 3. October 12, 2016, Wednesday.
In the morning, Mass was celebrated for the feast of St. Michael and All Angels (it was Sept. 29 on the church calendar) by Dean and Archpriest Mark Rowe of Florida. The various other clergy concelebrated in this service. Fr. Mark provided materials for the Reception of a Bishop so that we could learn to properly greet our First Hierarch (or any other bishop) in Western rite (WR) settings. Again, I missed presentations and was working under the most unhelpful of circumstances to prepare everything for my Thursday Mass. In the evening, along with Vespers, supper, and Compline, there was a final rehearsal for the next morning's Mass, amongst myself, Onuphrius from Austin, newly-tonsured Subdeacon Silouan from England, and Subdeacon Joseph from Arizona (who was set apart as a subdeacon, by the way, in my parish of Holy Protection here in Austin, in I believe Jan. 2013). pic: Communion of the clergy, Fr. Mark Rowe celebrating. 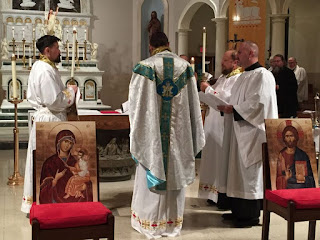 4. October 13, 2016, Thursday.
In the morning I offered Mass in the Roman rite for the feast of St. Jerome, abbot of Bethlehem. First came Terce at 6 a.m., closing with the Metropolitan's blessing. Next the Mass started (the Metropolitan led the confiteor), with chanting by Terri Brown of Christ the King in Pennsylvania. The closing variable benediction for St. Jerome's day was sung by the Metropolitan at about 7:30. After the distribution of the blessed bread, we had breakfast. I was finally able to attend a presentation, one on evangelism (subdeacon Adam Roberts of the Antiochian archdiocese). The midday office consisted of the Sext which had been omitted from the end of the Mass for lack of time (our hosts needed the chapel for their 8:00 service). I drove to the airport together with Subdeacon Adam, Nicholas Chapman of Jordanville fame, priest Thomas Cook of England, and Fr. Thomas' new subdeacon, Silouan. A beautiful day which the Lord made. -- written by hieromonk Aidan (Keller) of Holy Protection Russian Orthodox Church (Eastern rite), Austin-Pflugerville, Texas.

Photos from the Conference may be viewed here: http://bit.ly/2ewtbqf
hat tip: matushka Patricia Kinghorn of St. Cuthbert's Church, Providence, Rhode Island.
Posted by Fr. Aidan at 10:12 AM No comments: