Two styles of bishop's crozier or staff have been known in the Western Rite. Both are very old and venerable usages.

Before the Schism of 1054, the bishop's crozier most often had a Tau-shaped head. Here is a picture of a typical Western Orthodox crozier top: 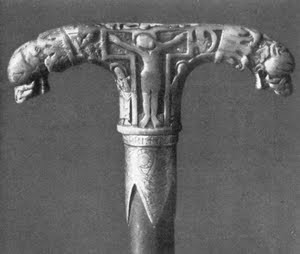 The other style, which is known to have been used prior to the Schism, is the shepherd's crook style.

The first predominated before the Schism, the second after the Schism.